Cultivating Self Mastery through ﻿the﻿ ﻿﻿Deeper﻿﻿ ﻿﻿Dimensions﻿﻿ of Practice

​Listen in as I share an overview of the powerful sessions featured today, as well as offer you a meditative practice to tune into the different layers of your being.

Be sure to join the dialogue, share your thoughts and connect with new friends on our Facebook community page.

Healing Trauma from the Subtle Body
with Seane Corn﻿

In this inspiring interview, Seane teaches us how trauma gets lodged and stored in the subtle body, and then reactivated by events throughout our lives. She shares her own ways of working with, and discharging, this energy as it arises so she can continually meet the demands of working for equal rights for all populations.

Saul has an incredible way of illuminating the felt-sense of yogic wisdom, and in this conversation he shares the science of prana and how to understand and work with the energy that underlies all of creation. He offers a meaningful view of the way anxiety disconnects our minds and hearts, and calls us into greater perception of the intuitive, subtle realms of life.

In this dynamic discussion, Hemalayaa shares the subtleties of what it means to practice in a feminine body, and how to work with the anxieties, fears and insecurities that plague so many women. She offers a simple practice for both expanding into the energy of shakti, and creating the container for that energy to stay healthy, balanced and powerful.

​Join in as the beautiful Donna De Lory shares her practice of devotional music to connect, de-stress and ride the waves of bliss into her heart. She describes her evolutionary journey with music, from a child in a musical family to a performer of pop music with Madonna, to finding her true voice and purpose in uplifting and inspiring others into the more subtle layers of peace and the joy of being.

Ready for a life-changing adventure?

Gather together in community.

Thank You to Our Sponsors & Partners Dayna is devoted to cultivating the path of the heart through the sacred body temple. Her passion lies in the awakening of soul-consciousness through the embodied practices of yoga, shamanic wisdom and the healing arts. For over a decade she has led transformational events nationally and internationally, including yoga retreats, classes, immersions and trainings. Dayna is the co-founder and director of Hanuman Academy and Hanuman Adventures, and the Creative Director for Hanuman Festival. She enjoys bringing the life-changing power of yoga to people across the globe. daynaseraye.com Healing Trauma from the Subtle Body

In this inspiring interview, Seane teaches how trauma gets lodged and stored in the subtle body, and then reactivated by events throughout our lives. She shares her own ways of working with and discharging this energy as it arises so she can continually meet the demands of working for equal rights for all populations.

Seane Corn is an internationally celebrated yoga teacher known for her impassioned activism, unique self-expression, and inspirational style of teaching. Featured in commercials, magazines, NPR, and Oprah.com, Seane now utilizes her national platform to bring awareness to global humanitarian issues. In 2005, she was named “National Yoga Ambassador” for YouthAIDS, and in 2013 was given the “Global Green International Environmental Leadership Award.” Since 2007, she has been training leaders of activism through her co-founded organization Off the Mat, Into the World®. Seane has spent time in the US, India, Cambodia, Haiti and Africa working with communities in need- teaching yoga, providing support for child labor and educating people about HIV/AIDS prevention. Seane is also co-founder of the Seva Challenge Humanitarian Tours, which have raised roughly $4.5 million since 2007, getting the yoga community involved in fund and awareness raising efforts across the globe. seanecorn.com 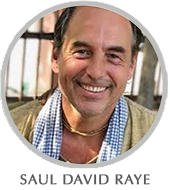 Saul David Raye is known for his unique and transformational approach to yoga, and spirituality. Saul’s teaching draws on 25 years of study and practice in yoga, Bhakti& tantra other forms of universal light, love and wisdom. His teaching is authentic and empowering, it comes from the heart, allowing students to connect deeply with their own inner power and light. Saul's teachings are grounded in a deep love and respect for Mother Earth and the great Spirit that flows through all of life. Saul shares this work through teacher trainings, workshops, classes, and sacred journey's. 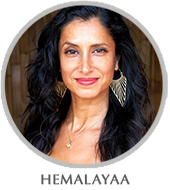 Hemalayaa is a Transformational Facilitator who empowers with her unique blend of traditional and modern teaching, mentorship and coaching. She provides tools to break down barriers that hold us back from experiencing a powerful spiritual connection. Hemalayaa is passionate about leading students to their truth as well as inspiring a yogic lifestyle. Her work inspires and motivates thousands globally to live healthy and joyful lives. In her classes, you will experience an inspiring fusion of yoga asanas, powerful breath-work and liberating free-form dance. As well as mantras and positive affirmations that empower the practice, transcend the body and mind, to then enter the blissful stillness of the soul. Hemalayaa’s magnetic energy leads all into a liberated state of being: balanced in true self-acceptance and a passion for life. She has been featured in numerous publications such as NY Times, Origin, Yoga Journal, LA Times, and Shape, as well as on the talk shows Ellen, Lisa Oz, and The Today Show. ​Gurmukh and Gurushabd are Legacy Teachers of Kundalini Yoga as taught by Yogi Bhajan. They both studied and served directly with Yogi Bhajan from 1970 until he left his body in 2004, directing the Golden Temple Restaurants in Santa Fe and Los Angeles, pioneering his first Yoga Center in Los Angeles in the early ’80s, sitting at his feet for the Teachings for many years in Los Angeles and New Mexico. Gurmukh attended the Khalsa Women’s Training Camps with Yogi Bhajan from 1972 until he left his body. For more than two decades they experienced the White Tantric Yoga Courses and Solstice Gatherings that he presided over in person. In his household and in public they served him directly.

Their commitment to spread these Teachings has been and continues to be inspired by their Teacher Yogi Bhajan. These Teachings will reverberate on this planet for centuries. Their Mission is to do what he did: foster students to be teachers 10 times better than they are.

We humbly bow to any Souls who wish to join in this Journey of Awakening. This is how the Aquarian Age will blossom into the next Great Age of Peace. Liberate Your Creativity through Dance & Song

Join in as the beautiful Donna De Lory shares her practice of devotional music to connect, de-stress and ride the waves of bliss into her heart. She describes her evolutionary journey with music, from a child in a musical family to a performer of pop music with Madonna, to finding her true voice and purpose in uplifting and inspiring others into the more subtle layers of peace and the joy of being.

De Lory’s keen pop sensibility was honed by two decades of touring the world as Madonna’s back-up singer and dancer, performing in the documentary film Truth or Dare and on the Who’s That Girl, Blonde Ambition, Girlie Show, Drowned World, Reinvention and Confession tours. She grew up in a highly musical household—the daughter of the late, Grammy-winning pianist and producer Al De Lory, who was part of the legendary Wrecking Crew and inducted into the Musicians Hall of Fame. Her grandfather played in the studio orchestra at Warner Bros. for films including Casablanca and Gone With The Wind.

Following up on the international dancefloor and chart success of her self-titled, 1993 MCA/Universal solo debut album, De Lory went on to extensive recording work with such artists as Bette Midler, Leonard Cohen, Belinda Carlisle, Carly Simon and Selena, to name a few, also lending her voice to film soundtracks. And with her 2004 album of sacred Sanskrit mantras, The Lover and the Beloved, De Lory became one of the foremost voices of the burgeoning world devotional music scene. All of these elements meld together beautifully on Donna's new solo album, HERE IN HEAVEN.

HERE IN HEAVEN, is a gorgeous mélange of all the flavors and colors in the gifted singer/composer/multi-instrumentalist’s multifaceted musical world. Beloved for decades as a reigning diva of devotional music, De Lory also has deep roots in heartfelt and expressive pop songcraft. Her vision and breathtaking voice possess the scope and range to embrace all of these influences on HERE IN HEAVEN. The self-produced album blends vibrant Indian and Latin tonalities with contemporary grooves, lavish string arrangements and exquisitely crafted melodies. It all adds up to a masterful musical statement that is deeply personal yet universal in resonance.

Seven of the album’s nine songs are originals that showcase De Lory’s considerable skill with classic song structures and arrangements. Her evocative melodies and extraordinary voice are framed by pristine instrumentation and percussive grooves. The emotional truths contained in these engaging, accessible tunes are just as uplifting and profound as those of the cherished sacred mantras for which she is so respected. Stylistically, the new album represents a bridge between De Lory’s two musical worlds.

It is an intimately personal work, with songs paying poignant tribute to both her late parents, a passionate Spanish-language ballad, “Amor Amor,” co-written with her father (and featuring him on piano), and inspiring, open-hearted paeans to the beauty of nature and love. She also covers two songs she’s always wanted to record, the moving “Never Be Mine” by Kate Bush and the lilting “Listen” — co-written with singers Avasa and Matty Love and featuring a charming chorus starring Donna’s daughter Luci and her third grade classmates.

Join us in Boulder, Colorado for our annual summer reUnion with the yogi community. Experience 4 blissful days featuring world-class teachers, extraordinary live music, inspirational talks, delicious food and the beauty of nature. Hanuman Festival is a safe and sacred space for conscious community to learn and grow. It is our intention for our attendees to take what they experience at Hanuman Festival out into the world to raise the vibration and positively impact the world. hanumanfestival.com

Located near Garden of the Gods, downtown Manitou Springs and many other natural and historical Colorado destinations, SunWater Spa and SunMountain Center are creative sanctuaries for wellness. SunWater Spa offers a variety of unique treatments and services utilizing the sacred and rejuvenating mineral waters of Manitou. SunMountain Center hosts retreats and Bed & Breakfast guests and features a thriving biodynamic farm and Living Arts program. A visit with us is an opportunity to rest, replenish, and renew yourself holistically as you discover beauty, inspiration, and history around every corner. sunwellness.net